A comfortable sofa, nice conversations, poetry reciting, storytelling and sound walking; now picture all of this together taking place in the busy market square of Dieburg. That was the StadtWerkstattMedien, performed and organized by the Hochschule Darmstadt’s (h_da) Master students from the program International Media Cultural Work, invited by their collaborator Museum Schloß Fechenbach. A class of 35 students from over 20 different nationalities were acting in 7 groups. Each group had come up with a project to bring together the students from the h_da Mediencampus in Dieburg and the local inhabitants. Entitled ,,Begegnungen in Dieburg”, the event happened last weekend (November 25th and 26th, 2017) from the morning to the early afternoon, attracting local residents and bystanders due to its multimedia and innovative concepts.

The StadtWerkstatt promoted diversified activities that encouraged people to participate. It subsequently illustrated to the audience how the media faculty operates. The event has not only helped establishing a connection between students and residents but has also demonstrated students’ individual and collective skills, transforming ideas and theories into practical works, thus shaping new media professionals engaged in facilitating the creative essence of digital media to amateurs. 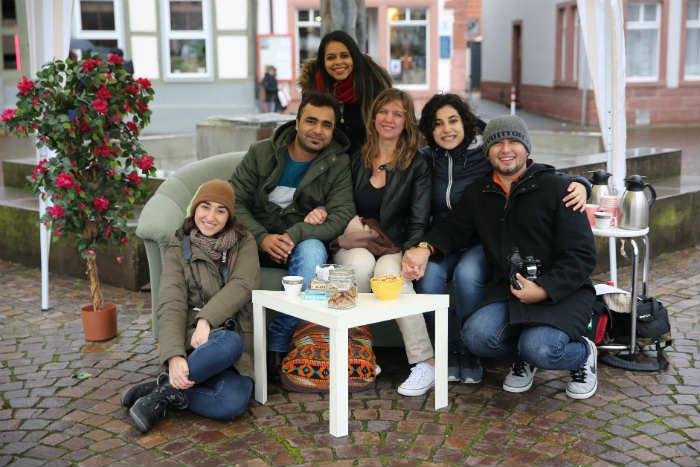 Not even the raindrops and the windy weather had affected the significant public attendance on the first day. Among many remarkable ideas, the display of a sofa among the street market had caught the attention of the people and the press. Bystanders were curious to understand the idea behind the concept.

According to the group responsible for setting the living room in the street, the main goal was to make people feel comfortable, relaxed and to share conversations with the students. This was conducted by creating a cozy and inviting environment. ,,We wanted to create a space where people could get to know us a little more and take pictures as a new family, composed by those who share the same location but, so far, did not know each other”, said Lis de Oliveira, 25, from Brazil, one of the group members.

The bookstore in the market square was also crowded with people interested in listening to creative poetry written and performed by the students in their own mother tongues. Amani Maache, 23, from Algeria who read her authorial poem in Tamazight and French had the following to say: ,,Listening to different poem verses in languages one does not understand but still somehow grasps through the performance of unusual sounds and melodies that carry the spoken words, is evidently marked as a unique experience.”

As quiet as a regular Sunday in Germany, the second day of the workshop was calmer but still managed to get participants and accomplish the main mission of the event. All of the collected multimedia materials will be edited by the students and the resulting works will be presented as media sculptures next weekend (December 2nd and 3rd, 2017) in an exhibition at the Schloss Fechenbach.